Home / About Us  / Team / Carolyn Goldman 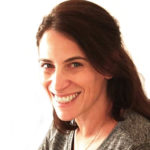 Carolyn Goldman is an award-winning television journalist, who holds a B.A. in Comparative Literature and Hispanic Studies from Brown University, and a TESOL (Teaching English as a Second Language) certification from Columbia University.

Carolyn first moved to Mexico City in 1992 as a research assistant for a university professor, and started her career in journalism as a book reviewer for a national daily newspaper in Mexico.

Returning to her hometown of New York City, she moved into television, producing national and international news for the Public Broadcasting System, and later for NBC Network News, and Dateline NBC, the network’s in-depth magazine program.

Carolyn returned to Mexico in 2005, where she describes her expanded professional career as general “fixer.” She has worked as a news journalist for U.S. television networks, and produced written and video content for publicity agencies and Fortune 500 companies.

She has also worked as a translator, editor, English teacher, and consultant for Mexican students and professionals applying to post-graduate programs abroad. She has managed the estates of expatriated families, and acted as mediator between U.S. and Mexican attorneys and financial advisers.

Fluent in spoken and written English and Spanish, as well as the idiosyncrasies of both U.S. and Mexican cultures, Carolyn is an expert in helping individual, family, and corporate clients successfully navigate the divide between the two countries.