Home / About Us  / Team / Daniel Schmitt 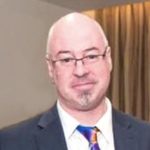 Daniel Thomas Schmitt completed his undergraduate degree in English at Marian University in Fond du Lac, Wisconsin and holds a Master’s degree in Literature from Northeastern Illinois University in Chicago. Daniel gained exposure to Japan through his seven years living there teaching English in the Japanese public school system. Initially, as a member of the JET Program, he taught junior high school students in Ishinomaki, Miyagi Prefecture for three years. Upon completion of the JET Program tenure he led a multinational team of instructors at Narita Kokusai High School in Narita, Chiba Prefecture as a member of the Wisconsin-Chiba Sister Schools Program.

After returning to the U.S., Daniel joined Sumitomo Electric Carbide, where he worked for five years in total, both at its office in Illinois and on a 1-year assignment to headquarters in Osaka. He was involved in supply chain management, business administration, and human resource management. He supervised a $500K project for implementation of a warehouse management system and purchased and maintained inventory worth over $100 million. Working closely with both Japanese and American colleagues, his duties included providing linguistic support for trade shows, business meetings, publications, presentations, technical training, and factory tours. In the HR area, he assisted with recruiting, hiring, job description creation, and termination of staff.

In addition to his work with Japan Intercultural Consulting, Daniel currently owns and operates private businesses in both the United States and Japan. He is regularly invited to join federal trade missions to Asia. He also continues to work in manufacturing as an ISO auditor and operations manager with a focus on procurement, global supply chain logistics, and inventory control.

Daniel is also an active participant in the sister state relationship between the state of Wisconsin and Chiba Prefecture. As Vice President of Wisconsin-Chiba, Inc. he helps to coordinate regular exchange activities focusing on business, science, education, and culture often serving as a guide and interpreter for visiting delegations from Japan. He has trained in Aikido for more than 20 years and is currently Dojo-cho at Aikido of Hales Corners in the suburbs of Milwaukee.