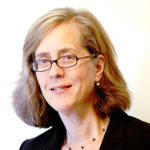 Elizabeth, a native of Albany, N.Y., earned an M.F.A. in East Asian Languages and Literature (Japanese) at the University of Iowa before heading to Japan. She spent the next 15 years living and working in Tokyo.

While in Japan, she graduated from the one-year advanced language program offered by the Inter-University Center for Japanese Language Studies, also known as the Stanford Center. She spent the next five years working as a translator and interpreter in the major Japanese bank Yasuda Trust before moving to a position as book editor with Kodansha International, where she produced books in English on topics including Japanese business practices, language, art, and cooking.

During her nine years with Kodansha, she regularly presented book proposals in Japanese at meetings with company executives; met with Japanese authors by herself, gaining permission to publish English versions of their books and ironing out contract details (all in Japanese); and interpreted at company-wide business functions.

While in Japan she made a wide circle of Japanese acquaintances and friends from all walks of life including many company executives and became adept at navigating between Japanese and Western culture in a wide variety of situations.

Since returning to the U.S. she has taught Japanese language at Bennington College and translation of Japanese literature at the State University of New York at Albany. She has worked as a freelance editorial consultant on book projects related to Japan. She has also served as a freelance interpreter (in design meetings as well as in a clean room environment) for local company GE Healthcare, interpreting between Japanese and American engineers on the design, installation, and use of high-tech equipment.

She also works as a freelance essay and features writer. Her work has appeared in publications including The San Francisco Chronicle, The Albany Times Union, and Hudson Valley magazine. Elizabeth excels at bringing people together and at narrowing the cultural divide with sensitivity and humor.