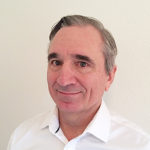 Fred is a graduate of Dartmouth College, with a B.A. in Spanish Language & Literature and American History.

Fred’s experience as a junior high school and college student in Spain during the 1960s and 70s gave him an appetite for life abroad at an early age. He left the U.S. when he was 24 to live in Japan and stayed there for 17 years. He became fluent in Japanese through working with a private tutor and also learning on-the-job. While living in a regional, mid-sized Japanese city, Fred raised a family and took on a great variety of jobs such as English and Spanish instruction, and Japanese and Spanish translation and interpreting for corporate clients in the auto, hospitality, and high-tech industries. He also wrote his own scripts in Japanese for 3 different local FM regular radio programs that he hosted over a period of many years. His life and work experiences from this period give him a great deal of empirical knowledge on how Japanese view the world.

Fluent in Japanese and Spanish, Fred returned to the U.S. in the mid-90s. As a translator and interpreter, he gained more experience serving the needs of American businesses and legal firms, as well as Japanese firms with operations in the U.S. Through his interpreting work, Fred had the opportunity to work with some of the premier consultants from Japan applying the principles of lean manufacturing in high stakes operations such as the USAF Joint Strike Fighter Program.

Fred eventually began offering services as a consultant himself in the application of lean manufacturing. Clients include factories producing temperature sensors, system cabinets and furniture, carbon black, and cell phones. He has helped clients realize significant cost avoidance through right-sized equipment, unleash unused production capacity by reconfiguring lines, enable simultaneous production of different products without increasing personnel, achieve work-cycle time reduction, and prevent material losses. His approach is to advocate for an environment of responsibility and innovation in the workplace. A representative project took him to Chihuahua, Mexico to help improve productivity at a cell phone plant that was dealing with the unstoppable production increases in China that were putting the plant’s very existence in danger. Through hands-on workshops, Fred helped the focus area more than double its output without increasing personnel.