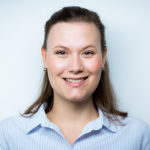 Julia has a degree in the Economics and Politics of East Asia from Ruhr-University Bochum, with a major in Japanese business. She then graduated with a Masters in International Management, majoring in human resources management, from Bochum University, during which time she also spent 5 months studying in Shanghai, China at Tongji University.

She has been involved in the design and delivery of cross-cultural training on Japan as an intern for Pilkington Deutschland and also for Akebono Brake during a one-year assignment as intern and contract employee at their headquarters in Japan.

After completing her studies, Julia worked in HR for the Japanese chemicals, cement and machinery company Ube Europe and then joined the Japanese bearings company NSK Deutschland as assistant to the HR director where, among other tasks, she supported communication and projects with the Japanese headquarters. In both companies she particularly focused on Japanese expatriate relocation and support, and this has led to her starting her own relocation consultancy.

Julia is fluent in German, English and Japanese and has a basic command of Mandarin Chinese, French and Spanish.