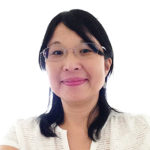 Kazuko is one of the most highly respected teachers of the Japanese language in Mexico, and has over twenty-five years of experience in the field of Japanese pedagogy. Her main area of research is linguistics, particularly the comparative study of Japanese and Mexican languages and cultures. Born and raised in Hiroshima, she has lived in Mexico City since 1991.

Early in her career, after several years of teaching in Japan, she joined the faculty of the Universidad Nacional Autónoma de México (UNAM) in 1991, where she has taught continuously since then; and from 2005 to 2009 she served as chair of that institution’s Department of Russian, Asian Languages and Modern Greek at the Centro de Enseñanza de Lenguas Extranjeras. She has conducted teacher training, since 2007 has served as an advisor for the learning center Mediateca (Media Library), and since 2015 has directed Teletándem, a language exchange conversation program with other universities. Since 2017, when the center changed its name to the National School of Languages, Linguistics and Translation (Escuela Nacional de Lenguas, Lingüística y Traducción, or ENALLT), she has taught “Languages as a Subject of Study” in the bachelor’s degree program for applied linguistics. She actively participates in organizing academic events as part of a committee on applied linguistics, and conducts seminars on mutual understanding and collaboration in intercultural work environments.

Kazuko has published a number of academic articles on pedagogical methodologies, as well as comparative studies on topics such as politeness and the act of apologizing in Japanese and Mexican cultures. She is also active as a translator and interpreter of the Japanese language. She is a member of the Mexican Association of the Japanese Language and has served on its board of directors (2003-2005 and 2019-2021).

Kazuko earned a B.A. degree in Japanese Linguistics from Tokyo University of Foreign Studies, and an M.A. in Applied Linguistics from the Centro de Enseñanza de Lenguas Extranjeras at UNAM.