Home / About Us  / Team / Michiko Schwab 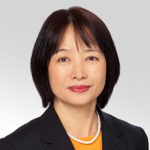 An experienced cross-cultural consultant, coach, and facilitator, Michiko has significant experience working with Japanese and American executives. She is a Japanese national with work experience with multinational corporations in sales, business development planning, research and human resources. Her areas of cultural expertise include Japan, China and the United States.

Michiko received her undergraduate degree at Kobe City University of Foreign Studies, majoring in Chinese. She holds a M.B.A. from Aoyama Gakuin, where she studied intercultural communication and wrote her thesis on how to globalize Japanese corporations.

Early in her career, Michiko headed up negotiations with a Chinese government agency regarding Hitachi’s new production plant, as well as directed sales for the plant’s parts and kits. Also in Tokyo, Michiko was an international planning analyst at Toppan Moore Systems, conducting a feasibility study for a joint venture with a Chinese company and organizing projects to network overseas subsidiaries.

Coming to live in the U.S. in 1992, she worked at Itochu International Inc. as a Human Resources Coordinator, facilitating communication between New York and the Tokyo head office. She also worked for the Japanese Business Unit of DRT (now Deloitte & Touche LLP).

Michiko has been a consultant and coach since 1998. She has trained and co-trained groups of American and Japanese managers and employees on how to work productively with their colleagues, employees and clients. She has also conducted pre-departure training for Americans going to Japan on business as well as post-arrival Japanese businesspeople who have come to the U.S. She has a broad base of experience working with major American and Japanese organizations.

Michiko is also active as a coach, helping clients become better leaders and communicators across culture. Her work with executives includes evaluating current communication skill levels, determining the communication skills needed for the target culture (e.g. Japan), and creating strategies to narrow the gap by increasing awareness of cultural differences and strengthening specific skills. She also has experience coaching executives involved in M&A and other organizational transformations by identifying differences between corporate cultures, helping them to navigate the differences and retain top performers.

Michiko on whether Japanese people are asleep during presentations