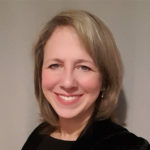 With deep experience in Japanese, Latin American and U.S. cultures, for the past fifteen years Sarah has conducted training and teambuilding sessions for Japan Intercultural Consulting throughout the U.S. and Mexico. She directed JIC’s Mexico branch for five years, and in 2012 moved back to her hometown of Kansas City. She earned a B.A. in East Asian Studies from Yale University and a Ph.D. in Japanese religion from Stanford University, and is fluent in Japanese and Spanish.

She is highly experienced in working with the U.S. and Mexican operations of Japanese firms, particularly in the automotive, auto parts, and electronics industries. She has worked extensively with companies involved in mergers and acquisitions, and possesses a unique understanding of the challenges and opportunities that arise in these new partnerships.

Sarah also lived and worked as a translator and interpreter at a Buddhist monastery in Kyoto for seven years, where she presented regular lectures and workshops and led week-long meditation retreats. Her participation in both the rituals and business operations of that institution has given her a unique perspective on Japanese organizational behavior, and a deep awareness of the traditional cultural factors that influence Japanese communication in the workplace.

In parallel to her work as a trainer and consultant, Sarah serves an assistant professor at Johnson County Community College in Overland Park, Kansas, where she teaches courses on world religions and Japanese culture. She has taught courses on Japanese religion at Stanford University and Santa Clara University, and has been a visiting scholar at the Centro de Estudios de Asia y África at El Colegio de México in Mexico City and at the Historiographical Institute at the University of Tokyo. Drawing on her experience in Buddhist practice, she also offers meditation coaching and workshops for both individuals and organizations.