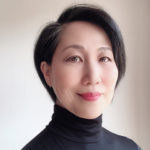 Born and raised in Kamakura, a town rich in the history of Zen culture, Yoshiko Muto was exposed throughout her childhood to traditional cultural practices. She holds a B.A. in Literature from Seijo University in Tokyo. As an expert language teacher and teacher trainer, she has deep insight and over 25 years of personal experience in the field of cross-cultural communication.

In 1987, after working in the field of art management and living in London, she started teaching English for Japanese businesspeople and Japanese for American and European executives, with an emphasis on communication skills, at language schools in Tokyo.

After frequently travelling between Japan and Brazil since 1987, she moved to São Paulo in 1999. She founded her own Japanese language school and serves as its director. She also has been working as a trainer of Japanese teachers, offering teacher development seminars, and coordinating courses such as the Pan American Regional Seminar and others for both native and non-native Japanese speakers in São Paulo and other states. In 2007 she was invited by the Japan Foundation of São Paulo to take part in the editorial project of a bilingual reference book for teachers, by writing a chapter about teachers’ capacities and the management of schools.

Yoshiko received her coaching certification from the Foundation of Global Life Learning Center, Tokyo. Her specialty as a coach is cross-cultural support for expatriates and their families in Brazil and other developing countries, and she offers one-on-one coaching via the Internet. She is fluent in Japanese, English and Portuguese. She is a member of the Society for Teaching Japanese as a Foreign Language (Japan) and SIETAR BRASIL (Society for Intercultural Education, Training and Research).