Home / About Us  / Team / Ayako Hashimoto 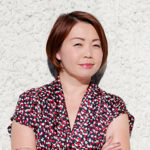 Ayako combines a deep knowledge of Japanese, Mexican, and U.S. culture with extensive experience as a cross-cultural facilitator. Born in Tokyo, she received her B.A. in policy management from Keio University in 1998. She has lived in Mexico for more than 15 years and, even after relocating to Spain in 2016, continues to practice trilingual interpretation and specialize in facilitating trainings on lean manufacturing for multinational corporations in Mexico.

In addition to her work as a cross-cultural trainer, Ayako’s areas of expertise include legal issues for business development in Mexico, localization, intercultural labour practices, and strategic process development. As a freelance consultant, she has worked on a diverse array of projects for both Japanese and Mexican clients from the public and private sectors.

From 1998 to 2008, she worked as a consultant and legal advisor to a legal professional corporation in Guadalajara, Mexico. From 2010 to 2013 she was involved in a project for the Japan International Cooperation Agency (JICA), helping organic coffee growers in Chiapas that employed continuous improvement and lean manufacturing methods, and working with them as a consultant on lean project designs and business development. At the same time, she led two independent study projects with the Universidad Iberoamericana on improving processes on the coffee production in indigenous communities in the state of Chiapas. Since 2014, she has been a technical advisor for a cooperative of coffee growers that operates a production plant in Chiapas and various coffee shops in major cities in Mexico. She is passionate about building an effective working team of business counterparts of diverse cultural backgrounds in different locations around the world.

She is certified as an official translator and interpreter of English, Spanish and Japanese, authorized by the Supreme Court of Justice of the State of Jalisco, Mexico. In addition to her native Japanese, Ayako is fluent in written and spoken Spanish and English, and has elementary proficiency in French.