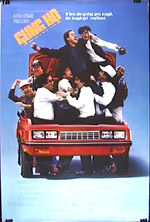 Ok, so I’m a little late. After somehow managing not to see it for the past 20 years (despite being asked about it constantly), last night I finally saw Gung Ho

– a movie about what happens when the Japanese buy a failing car factory in the U.S. Midwest. It stars Michael Keaton (back when he had more hair) but the true star in my opinion is Gedde Watanabe who plays the beleaguered Japanese plant manager.

It portrays real culture clash issues (I should know, I’ve been in more than my fair share of Japanese auto related factories in the Midwest!), but unfortunately only gives Hollywood-style resolution for them. Evenhanded and enjoyable for what it is though. Worth checking out if you didn’t see it back in ’86!

By the way, the friends I saw it with asked me if the kind of harsh corporate training program depicted in the opening sequence (where employees wear ribbons of shame and are made to apologize for their failings) really happens in Japan, and I had to answer yes. Sigh.