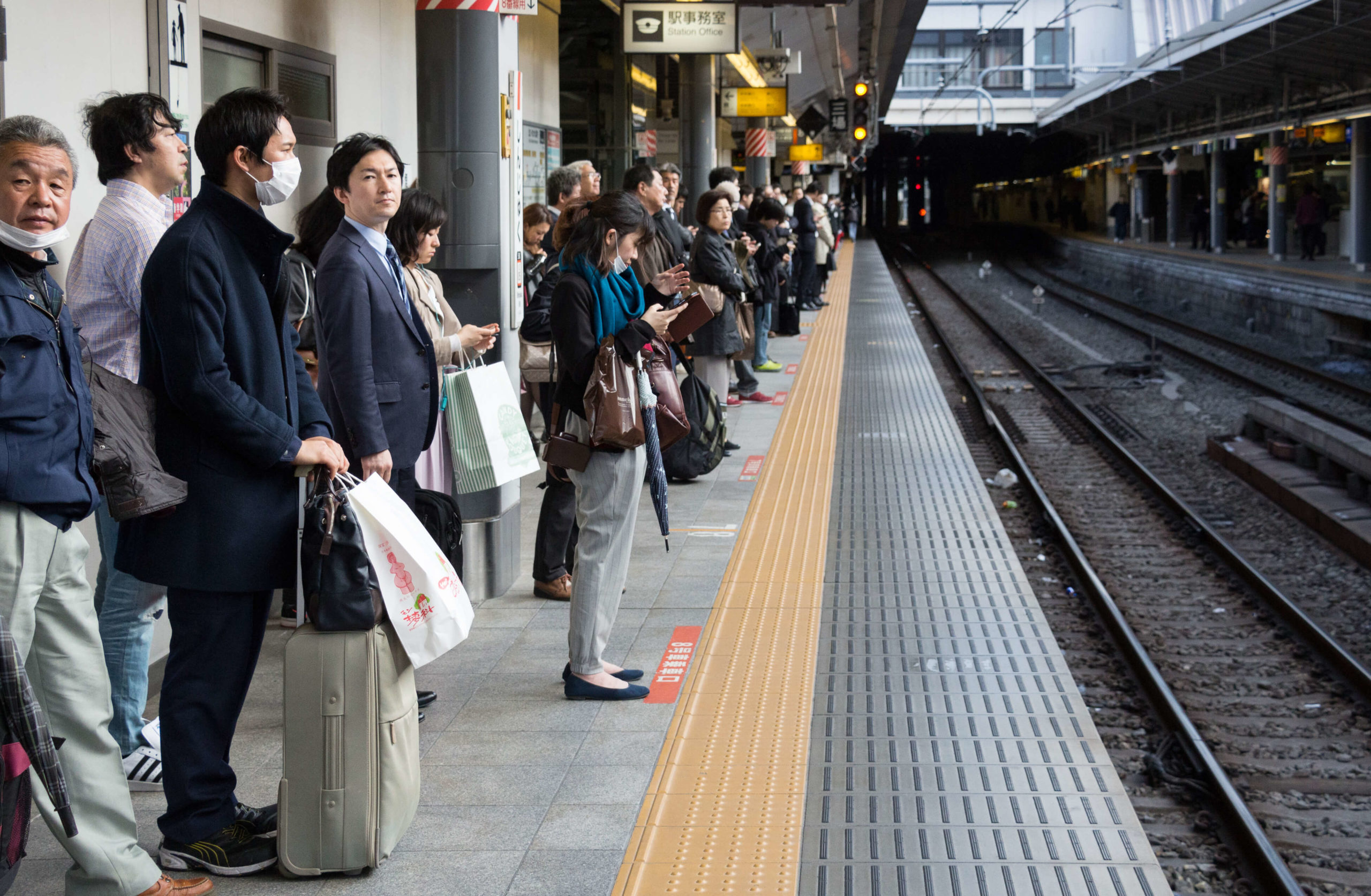 I need it.  RIGHT AWAY.  Rummaging through my handbag.  Where is it when I need it!?!  Then I find it, the familiar little plastic case.  Thank goodness.  My new best friend and constant companion, yes it’s there.  Ah, relief is on its way.

Has Rochelle become an addict?  Yes, but not to a drug.  The indispensable contents of the little plastic case lurking the bottom of my purse is a pair of ear plugs!  My key to survival when visiting Tokyo.

Masses of people are everywhere in Japan, and even though the Japanese tend to be quieter than Americans, when you get a lot of them together it can’t help but get noisy.  Plus, Japan is the land of announcement by sound.  For example, when I take the JR train, my journey starts with an announcement on the platform “On track 1, a train bound for Shibuya is coming.  Please wait behind the dotted line.”  When it arrives, another voice declares that “This is Shinagawa.  Please watch your step.”  Then, just before the doors are set to close, a warning melody about ten seconds long plays.  (In the past, this function was performed by a loud whistle, but JR decided to replace it with a melody in order to help reduce the stress on riders.  The melody is slightly better sounding, but because it’s played so loudly it’s not that big of a reduction in stress if you ask me.)  After the melody stops, another announcement warns “The doors are closing.  Dashing to get into the train car at the last minute is dangerous, so please don’t do it.”  (Of course, as this announcement is playing, at least half a dozen people are dashing to get into the train car, often including yours truly).  With a train arriving every few minutes on each of the platforms, at larger stations with multiple platforms such as Shinjuku, Shinagawa, and Tokyo, the overlapping sets of announcements get to be pretty loud.  To help riders distinguish the different sounds, some platforms have a female announcement voice and some have a male announcement voice, and a different door closing melody is played on each platform.  Given that trains are constantly coming and going, the result is a kind of announcement opera, albeit non-harmonious, and, at least in my case, a giant headache in a matter of minutes if I don’t have my earplugs firmly in place.

I asked a friend who is a longtime Tokyo resident about this subject of noise pollution in Tokyo.  He shared with me his current pet peeve, the health club he belongs to.  Evidently, exercisers are treated to a constant barrage of announcements.  I asked, what kind of announcement?  First of all, periodically the health club users are exhorted that if they don’t feel well while exercising, they should let somebody know.  Every time there is a class about to begin, it is announced along with a detailed description that is repeated not once but twice.   And there are also frequent announcement of special bargains on supplements and other products in the club’s store.  He says that it interferes with his being able to relax and enjoy his exercising, and contrasts considerably with the quiet workout time he enjoyed at a health club in the U.S. while visiting there recently.  And come to think of it, I don’t think I’ve ever heard an announcement made at the health club I use in the U.S., just music.

I asked him why he thought they made all those announcements, and he replied “It’s part of the Confucian mindset that things are run by smart people, and everyone else is stupid and thus has to be exhorted to behave properly by mottoes and oral reminders.”  This comment immediately reminded me of the Dutch commentator Karel van Wolferen, one of my favorites, who in his book The Enigma of Japanese Power likened the ever-present recorded reminders in public places in Japan to a “nursemaid” that makes people feel “like potentially naughty children.”

Indeed, he and Mr. van Wolferen have a point — many announcements one hears in Japan are rather condescending and quite unnecessary in a land where the average person is well-educated and conscientious.  For example, when I was in a Japanese department store recently, at every escalator there was a recorded announcement running on a loop, asking people to please hold onto the handrail, and for those with children or senior citizens with them, to please hold hands with them when getting on the escalator.  I don’t happen to have children, but I imagine that if I did I wouldn’t need a recorded voice to tell me that I needed to hold their hands on an escalator.  And if I were a senior citizen, I would want to make my own choice about whether I thought I needed to have my hand held, and I would probably be offended if someone decided to take my hand just because it had been suggested by a recorded voice.

Verbal messages also seem to derive from a sense of service beyond what non-Japanese would consider to be necessary.  One obvious example of this is the high-pitched sing-song recital of the contents of the floors by uniform-clad female elevator operators in Japanese department stores (which seem to be fewer and farther between nowadays, a happy casualty of the continuing weakness of the Japanese economy I suppose).  As they push the buttons (of the completely automatic elevators), they recite what is on each floor, despite the fact that this information is usually displayed not only on a sign outside the elevators, but also on a sign over the inside of the elevator door.  One only has to read to get the same information, but somehow delivering it verbally before a customer would have to ask for it is considered to be omoiyari (anticipating needs before they are stated).  One time I was the only person in the elevator in a store in Tokyo, and the voice of the elevator operator was really grating on my nerves.  I wished that she would just shut up.  I really just wanted to tell her “I don’t want to hear your recital, just give me a moment of quiet please!”  But I knew it was useless, because she was doing her job, which she had to do, and thus could not obey my request even if she wanted to, for fear of reprimand if anyone should find out.  I was also reluctant to hurt her feelings and take away any pride that she might have in her work.  Come to think about it, it must have taken a lot of work to memorize that spiel.  I was sorely tempted though to ask her to give her poor vocal cords, and my ears, a rest.  Too bad I didn’t have my ear plugs with me.