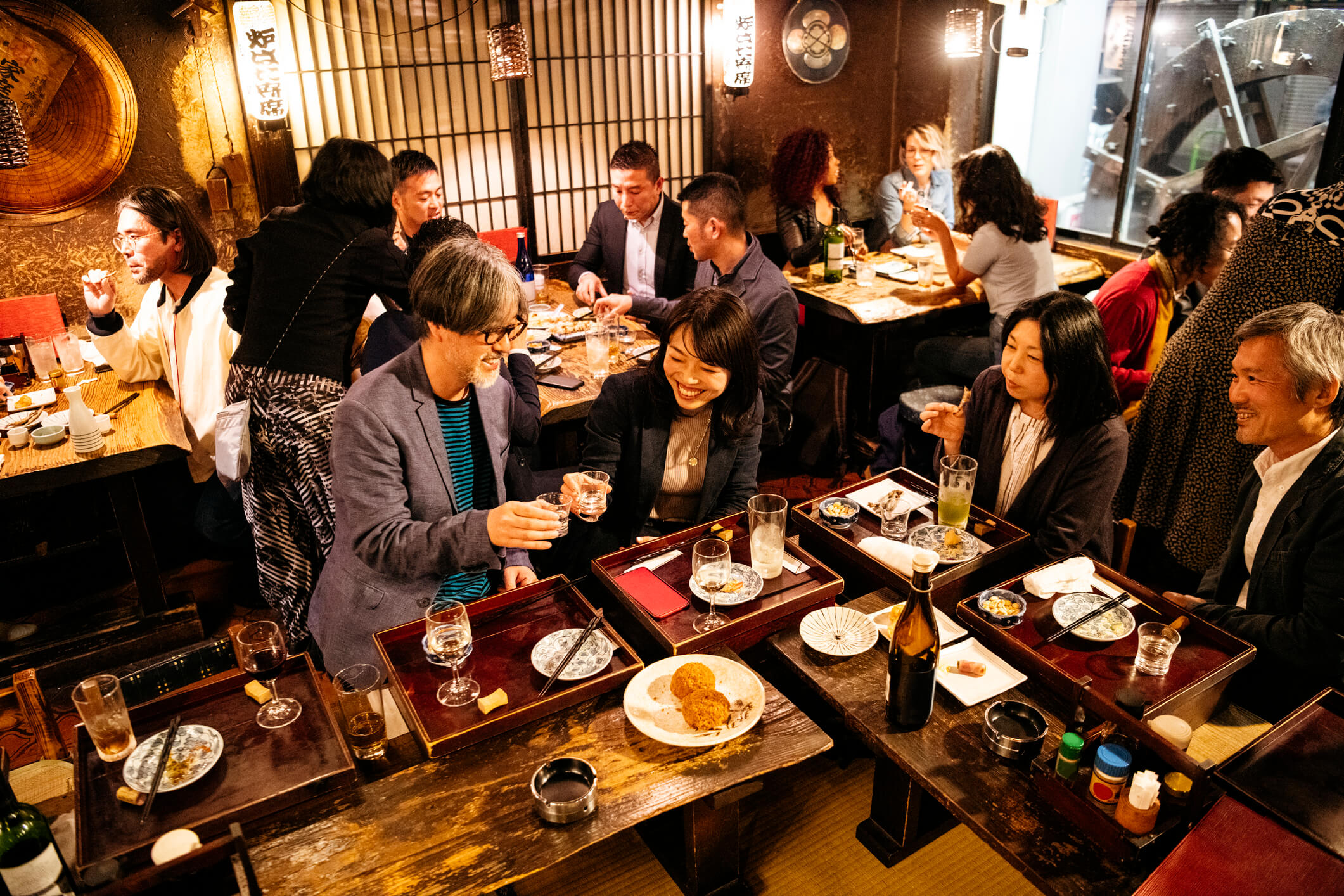 Many non-Japanese have heard that socializing is an important part of doing business in Japan, but wonder how to handle those situations. What is the etiquette? How do I avoid committing a faux pas? What if I don’t like the food? What if I don’t drink? Do I have to sing karaoke? What if they take me to a hostess bar? This article will help you navigate these common concerns.

While there are various reasons one might go to Japan on business, a key item on any itinerary should be building relationships with Japanese colleagues and contacts.  And the best way to do this is through socializing.

Wining and dining is a big part of Japanese business culture.  When visiting Japan (or even when you live there!), you can expect to be going out on a business dinner every night, and indeed the dinner slot is likely to be the most important part of your entire schedule.

However, many Americans are unsure how to make the most of Japanese-style socializing opportunities, and are not confident navigating the different customs involved.  This article will provide information on some of the situations that Americans typically find most difficult when socializing with Japanese.

Do I have to eat that?

One of the trepidations that many Americans have about socializing in Japan is eating Japanese food. Some people aren’t all that thrilled about raw fish, while others may have allergies or other dietary restrictions.  If there is a food that you absolutely cannot eat due to doctor’s orders or your ethics or religion, be sure to let your Japanese hosts know in advance so that they can plan for foods that are acceptable to you. Japanese hate surprises, so don’t tell them that you are a vegetarian when they have brought you to the doorstep of a steakhouse.

However, if it’s simply a matter of not being excited about eating certain foods, it’s best to have an open mind.  If you refuse to try something just because you don’t like the looks of it, you are likely to come across as snobbish to Japanese.  Also, what you are turning up your nose at is likely to be something that Japanese consider a gourmet item, and you will be seen as lacking culture.

I once personally had a food challenge in Japan when I recognized the delicacy placed in front of me as horsemeat carpaccio.  I wasn’t thrilled about this menu item that I had avoided up until that point, but I was in a situation where I could not avoid eating it without offending my hosts.  I was cringing as I brought it to my lips – then was pleasantly surprised when I discovered that it tasted delicious.  I ended up cleaning my plate.  This is an example about how our preconceptions about Japanese food can be mistaken, and how it’s important to try everything at least once.  It shows respect, and can open you up to some culinary adventures.  (The only exception to this “try everything” rule is raw or undercooked chicken, which sometimes is served in Japanese restaurants.  Several of my clients have ended up in the hospital after eating this in Japan.)

What about the drinking?

Drinking does tend to be a de rigueur aspect of nearly any social occasion in Japan, if not the most central aspect.  So undoubtedly when socializing with Japanese you will find yourself in a situation where alcohol is present and some people are imbibing rather large quantities.  However, that does not mean that you need to drink in excess yourself – or even at all.  If you’d rather not drink or want to stop drinking, there is nothing wrong with turning down alcohol.  What’s most important to the Japanese is that you are there and participating in the event.  As an alternative to alcohol, ask for water, juice, or oolong tea.  If you are drinking, leave your glass full when you’ve had enough, because Japanese will politely refill any glass that has space available in it.  It’s polite to do this glass refilling for others also, as a gesture of camaraderie.

An important aspect of business socializing in Japan is the nijikai, or “second stage” of the evening’s entertainment.  This involves a change of location after dinner has been completed.  Partially this is because restaurants want to discourage customers from lingering too long, and partially because stretching one’s legs and going to a different place tends to refresh everyone’s mood.

Another common nijikai spot is the karaoke bar, where everyone in the group performs by singing to a recorded accompaniment.  This is often a source of stress for Americans, especially those who are unable to carry a tune.  Many Americans find the idea of singing in front of others extremely embarrassing, and tend to want to refuse when it’s their turn to sing.  However, not taking your turn at the mike will be considered a snub by the Japanese.  The point of karaoke is not to be a good singer, but to bond with the group by doing something along with them, even at the risk of looking ridiculous. In other words, being a good sport is more important than being talented. So belting out a song yourself is highly recommended.  If you are truly concerned about your lack of musical ability, do a duet with someone, or wait until later in the evening when more alcohol has been imbibed and people are less likely to notice if you are off-key.

Another possible place you may be taken post-dinner is a hostess bar (known in Japanese as a sunakku, derived from “snack”).  At these establishments, attractive women sit next to each guest, pouring them drinks and engaging them in banter.  Rather than being viewed as annoying, this light conversation is the key attraction, as it’s viewed as creating a pleasant atmosphere that will enable the guests to enjoy a relaxed time together and thus bond more easily.  This may seem counterintuitive to Americans, who might find having to make chit-chat with a stranger more burdensome or awkward than enjoyable.  But in Japanese culture, the bar hostess is in some sense the modern-day incarnation of the geisha tradition – women whose purpose is to brighten a business environment with their feminine and light-hearted presence.  If you find yourself in one of these establishments, it’s best to play along and try to enjoy the conversation.  And remember that despite what may seem to be a sketchy atmosphere, bar hostesses are not prostitutes – it’s talk but don’t touch!

Spending time with your Japanese colleagues in a relaxed situation outside the office – be it eating, drinking, playing golf, singing karaoke, or just simple sightseeing – is extremely important for relationship-building.  Japanese want to get to know the people they do business with on a personal level.  They also are able to relax and talk more easily when they are away from the strictures of the office environment.  Furthermore, in Japanese culture alcohol is often used as an excuse for opening up more and saying things more directly than would be possible otherwise.  For these reasons, socializing is an essential part of developing relationships with your Japanese colleagues.  Spending the time to form bonds with Japanese during social occasions is an investment that will surely pay off.

AFTER FIVE IN JAPAN…HAPPY HOUR OR THE CRUX OF THE MATTER? THE ART OF NOMUNICATION

CHOOSING A RESTAURANT FOR DINING OUT WITH JAPANESE