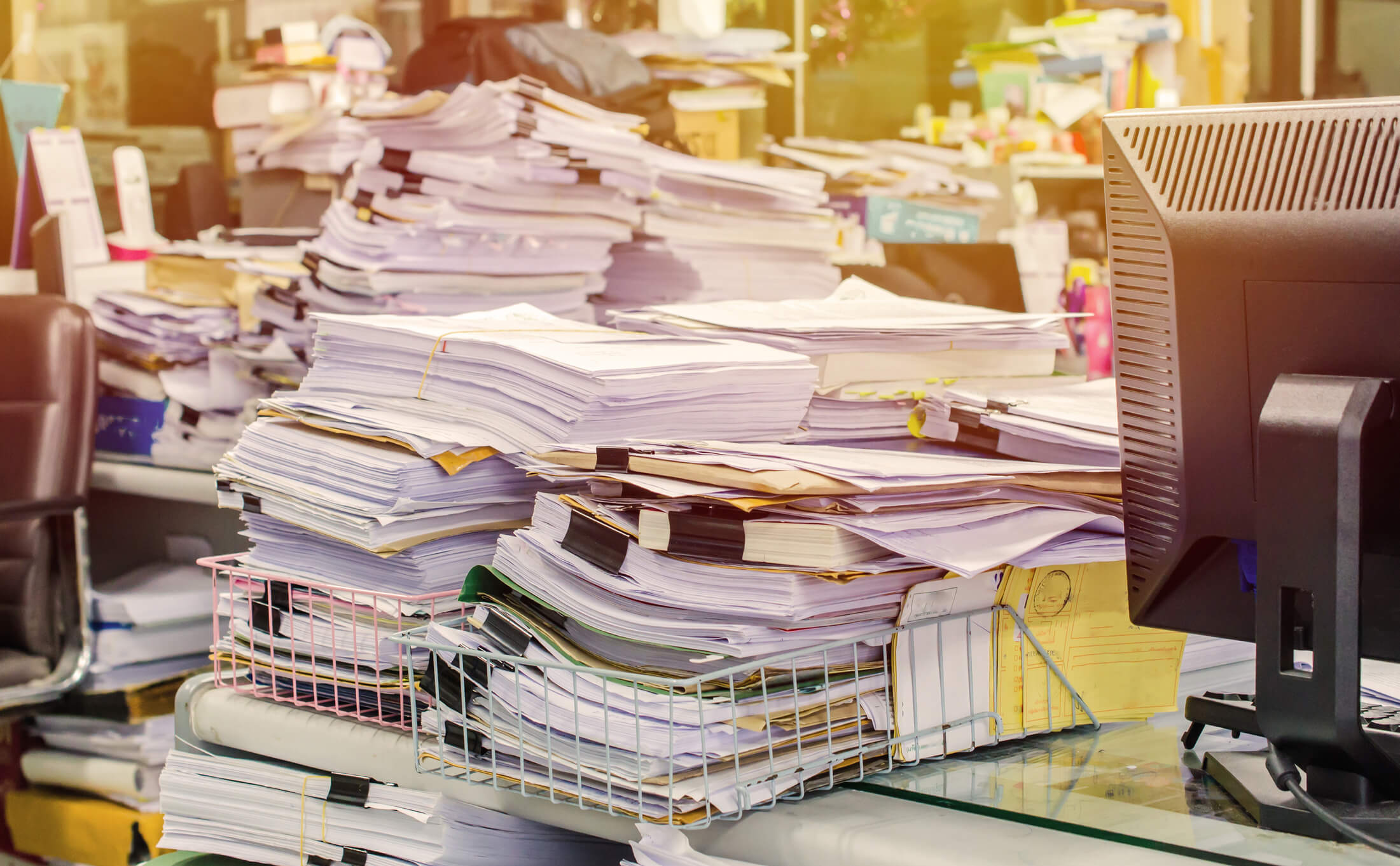 When I worked in Japan at a Japanese company, my work was well evaluated but there was one point that I was always criticized about — my messy desk.  Indeed, at one point I had accumulated so many papers that I had to store them under my desk and sit sideways because no room was left for my feet.  Somehow I have always had problems keeping things neat, going back to when my mother had to constantly nag me to clean my room.

My inability to keep my workplace well-organized is a trait that I share with many other Americans.  Even Barack Obama has admitted that he has a messy desk, and that he asks his staff to not hand him papers until two seconds before he needs them, because otherwise he will lose them.  There are so many people who need help with this issue that a whole industry in the U.S. of professional organizers, who are paid to help people get control of their clutter.

But all Americans don’t necessarily feel that a desk covered with papers is a bad thing.  There is a well-known saying that “a messy desk is the sign of a creative mind” and there is also a corollary, “a tidy desk is the sign of a sick mind.”  This shows a typical American attitude that “neatness” is something divorced from “getting things done” — quite opposite from the Japanese feeling that it’s difficult to work productively in a messy space.

When I recently posted some articles about the Japanese concept of 5S on my firm’s website, I was surprised by the reaction. Rather than expressing admiration for how Japanese have turned neatness into a codified practice, some readers felt that too much neatness could stifle creativity.  As one person said, “I think R&D and development divisions are messy in general. Great inventions requires chaos, mistakes, trial and error…” and another said “Considering that more often than never innovation comes out of chaos, mistakes, and improbable associations (e.g. microwave oven, penicillin, and so forth) how will our nicely, neatly, standardized and organized workplaces contribute to creativity?”

Comments like these show that while 5S seems like a no-brainer in Japan, it won’t necessarily be easily accepted by Americans. Remember that unlike Japanese schoolchildren, American kids don’t clean their classrooms, so straightening up may not be as natural an activity for them.  Rather, cleaning is something that another person (i.e. a janitor) is responsible for.  Also, because American homes are larger than Japanese ones, it’s not as imperative that they be neat — if the kid’s room is messy, an American parent may simply close the door.  In a Japanese home, space is at a premium, rooms often serve multiple purposes, and there is not room for unnecessary items or clutter.  So everyone in a Japanese household has to cooperate to keep things neat.

When explaining 5S to Americans, the first step is to decide how to translate the five terms into English.  There are many variations out there.  The one that I like best I spotted at one of my clients’ factories a few years ago:

Seiri: Straighten up – decide what you need.

Seiton: Store – everything in its place.

Seiso: Shine – clean it up.

Shitsuke: Strive – to compete these every day.

I particularly like this translation for three reasons.  First, it uses English words that all start with S.  Second, the terms themselves are everyday ones that are straightforward and easy to understand.  And the compact explanatory phrases are nice too.  This is a way of explaining 5S that will be clear to anyone.

If you are faced with an American like the ones quoted above who is skeptical about the value of getting organized, you may want to mention to them that research has shown that the average person in the U.S. spends anywhere from 16 to 55 minutes per day looking for items that they have misplaced.  That time rummaging through a pile of papers on a messy desk can really add up, and represent a big detriment to productivity.

5S IN THE JAPANESE WORKPLACE – SORTING OUT SEIRI

5S IN THE JAPANESE WORKPLACE – SEITON AT THE READY

5S IN THE JAPANESE WORKPLACE – SEISO: SEEING, SWEEPING AND SHINING