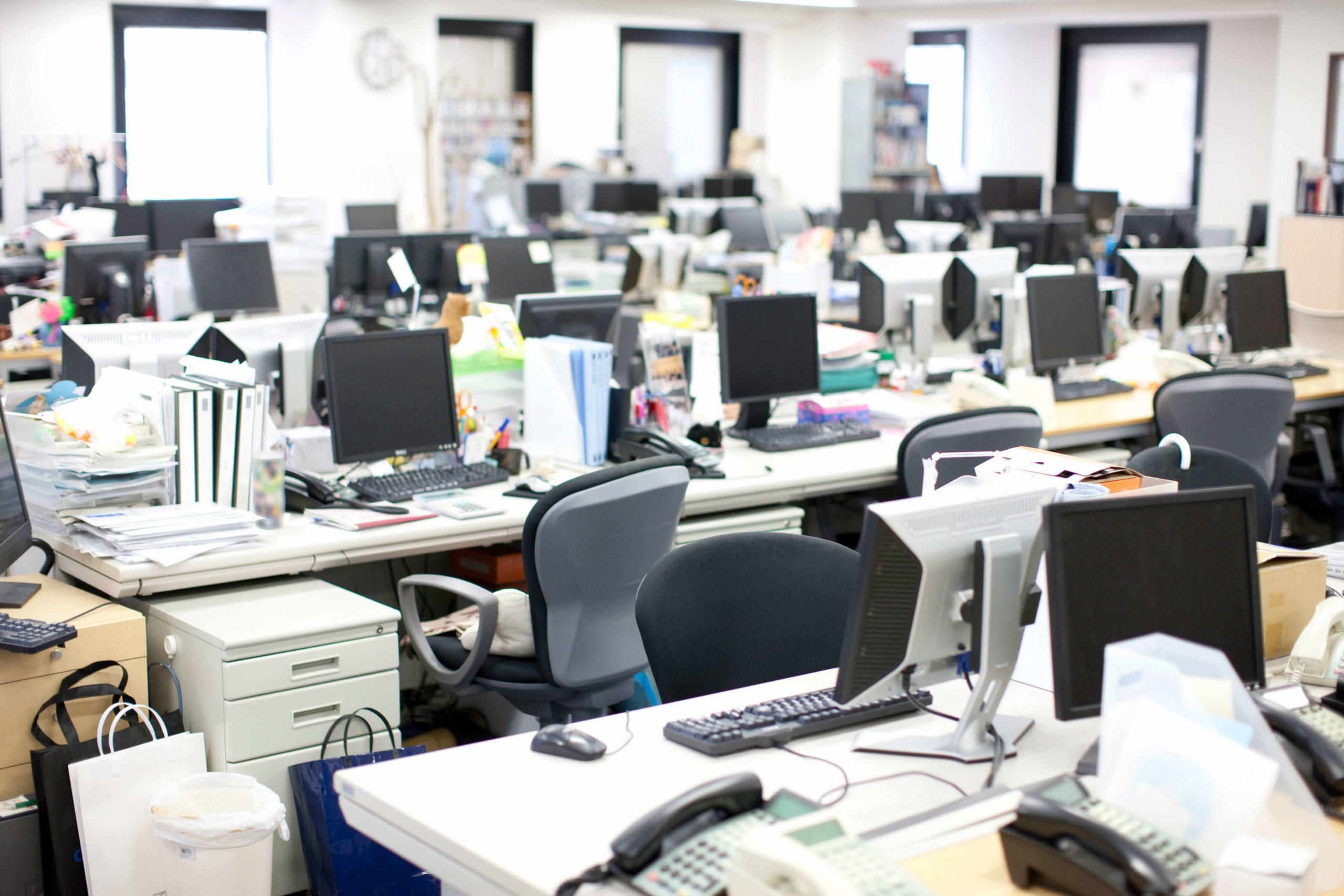 In this article I would like to address three common issues at Japanese firms –job descriptions, office layout, and correcting of work.  At first glance they may seem unrelated, but actually they all stem from the Japanese concept of organizational roles.

Why is there this difference in views on job descriptions?  First of all, in Japan it is rare for job descriptions to exist.  In fact, many employees don’t even have titles, they are only known as members of a particular team.  Typically, only managers at the level of section chief (kacho) and above get titles, and these are normally no more descriptive than their rank and the name of their department.

Rather than relying on set definitions of what they are supposed to be doing, Japanese tend to work like amoebas, shifting their work and taking on new activities as the organization’s needs require.  Everyone is expected to be on the lookout for things that need to be done but that no one is taking care of, so that nothing falls between the cracks.  When a new activity becomes necessary, the members of a team typically decide among themselves who will take care of it – often without consulting with their manager.  Japanese are used to working in this style due to their early training.  Japanese grammar schools emphasize a lot of group work, so it’s very comfortable for Japanese to work in teams.

In addition to being unfamiliar with them, another reason for the Japanese aversion to job descriptions is the fear that having a set job definition will limit the amoeba-like flexibility that they so value.  For a Japanese, one of the most horrifying things that an employee can say is “that’s not my job.”  In Japan, people are hired to join the company as a whole rather than take a specific position, so they are willing to do whatever is needed, even if it’s something that’s a very basic task (such as sweeping the floor) or not in their area of expertise or interest.  It’s this extreme flexibility of employees that makes the lifetime employment custom possible, and enables Japanese firms to be innovative in response to market changes.  Thus, for Japanese, the idea of someone refusing to do something that needs to be done just because it’s not written on a piece of paper is extremely distasteful.  It smacks of putting the employee’s desires above the needs of the company – in other words, of selfishness and disloyalty.

I believe that for Japanese firms operating internationally, the best way to bridge this gap is to create a working style that is a hybrid of both approaches.  Job descriptions need to be prepared because they make locally-hired employees more comfortable, and ease compliance with various local HR regulations.  At the same time, non-Japanese employees need to be flexible to take on a variety of tasks as necessary.

For the westerner coming to work at, or even visiting, a Japanese office, it’s a shock.  Rather than the individual offices or cubicles that are typical of western offices, in a Japanese office there are no walls between desks.

The spatial preferences of Japanese and westerners closely reflect our preferred working styles.  Westerners tend to dislike Japanese style open offices because there are a lot of visual and audio distractions.  There is also a lack of privacy, making confidential discussions or personal phone calls difficult.  This reflects our work style of working independently, using a lot of concentration in order to be efficient.

Meanwhile, Japanese tend to dislike western-style offices, feeling that the walls prevent close communication.  Japanese like being able to see and hear their co-workers, to be able to sense what is going on in their workgroup.  They like being able to consult with colleagues without getting up from their desks.  And Japanese managers like to be able to see their subordinates.  This preference results from the Japanese work style, which emphasizes group collaboration.  Concerns about privacy are minimal in a country where people are accustomed to living in houses with paper walls between rooms, and where it’s considered bad form for people to make personal phone calls during the workday.  Japanese are good at being physically close to others without being intrusive.  It should also be kept in mind that this type of desk arrangement is a rational response to the extremely limited availability of space in Japan – a western-style office would be quite a luxury when space is at such a premium.

Why does a Japanese boss make changes to his subordinates’ work?

You’ve turned in your wonderful report or beautiful engineering plan to your Japanese boss – and instead of positive feedback, what you get back is what you turned in, covered with red ink denoting extensive revisions!  This is a common and shocking experience for non-Japanese working with Japanese.  From a western point of view, it feels very strange to have one’s boss make extensive changes to one’s work.  It feels insulting, and after it’s been revised it feels less like one’s own work.

However, Japanese see this differently.  They do not view an individual’s work as their individual product and reflection solely on their individual performance.  Instead, everything a person works on is the product of their work group, and reflects on that group.  Thus, as part of the work group, a boss may change the content of a subordinate’s work product. Furthermore, a Japanese supervisor will be held accountable for the content of their subordinate’s work, and thus will be motivated to revise it as necessary to ensure that he is in agreement with it. In Japan, a subordinate would not consider his supervisor making changes to his work to be insulting at all.

Another reason that Japanese often make changes to a subordinates’ work is that they view this as a training tool.  In Japan, training is often done through a process called minarai (learning by watching).  The expert shows how something should be done, and the student watches and imitates it.  The expert then corrects any mistakes in what the student does.  Making changes to a subordinate’s work is a Japanese manager’s way of showing how something should be done, and of correcting him.  Rather than just implementing these changes, in Japan a subordinate is expected to carefully study what his supervisor has done, learn from it, and drawn on those lessons the next time.  In other words, if a change is made to your work this time, the next time you are expected to demonstrate that you have absorbed the lesson from it.

The layout of the typical Japanese office makes this it quite natural for workers and supervisors to collaborate very closely on projects, so that the end product is a joint effort.  When there are no walls and your desk is rammed right up against his or at most a few feet away, it’s very easy to casually ask your boss a question, get his input, or ask him to review a portion of your work.  Japanese refer to this as “horenso”, and feel uncomfortable when their non-Japanese subordinates do not do it.  The typical “works well independently” work style of westerners, in which we work on something without many questions or status reports mid-stream, and then present our completed project with a flourish, is foreign to most Japanese managers and tends to make them nervous.  If you do more horenso while you are working on your project, you can avoid having your manager make many changes after it has been completed.